Hello, I’m Chad. For the last several months I have been working on
Sticker Doodle, an app you should go download right
now!

In the course of building Sticker Doodle
(which you should go download right now), I ran into many brick walls
and learned way too much about Core Data, iCloud sync, Collection and
Table Views, and Diffable Data Sources.

There is documentation for each of those individually, but I could
find no clear and simple example project that ties them all together
in a neat little bow.

DISCLAIMER: This repo is for educational purposes. While I believe
that the code inside is production-ready, you should always read and
thoroughly audit any code you ship in a production application.

This is an example Xcode iOS swift project that demonstrates using the
following technologies:

It aims to implement a working app with the minimum amount of code to
accomplish the following features:

What this project is NOT:

If you are interested in having a focused (paid) training session for
your dev team about this topic, please contact:

This project uses only APIs availble in iOS 14 and earlier
(i.e. there are no iOS 15 APIs present in this project).

Building in the DEBUG configuration and using Automatically manage signing should allow you to run this example on simulators and local
development devices.

Provisioning for a RELEASE build is beyond the scope of this project.

If you are creating a new project and want to use Core Data and iCloud
sync, make sure to check the two relevant boxes at the bottom of the
dialog: 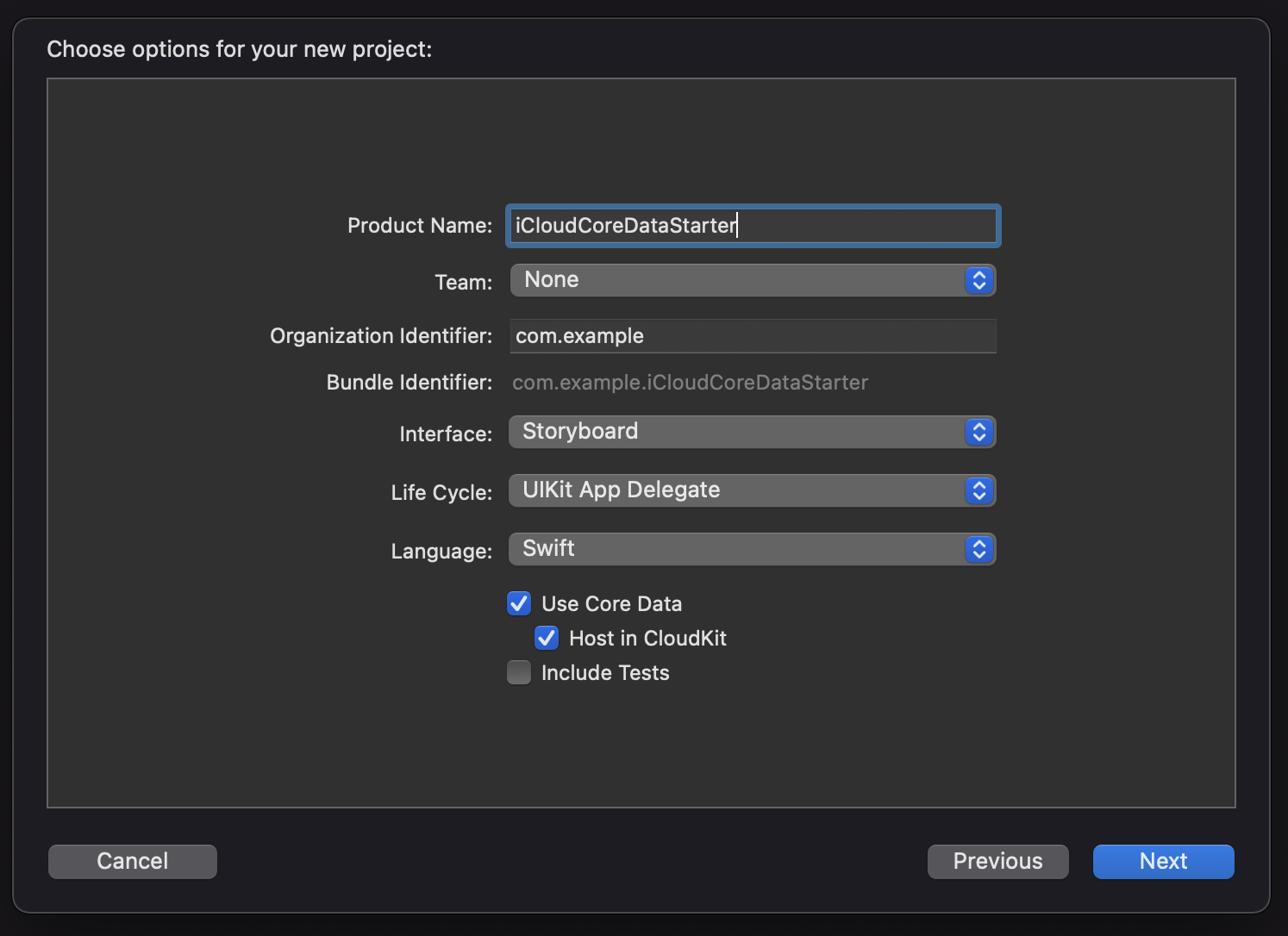 This has the advantage of creating the necessary .xcdatamodeld file
in your project to setup your database models, but it also creates
some boilerplate Core Data code in the AppDelegate which you can
remove if you plan on using the files in this example in other
projects.

In this example app, we are mainly concerned with the creation and
display of Thing objects. Things have two primary properties that
make a thing a thing: 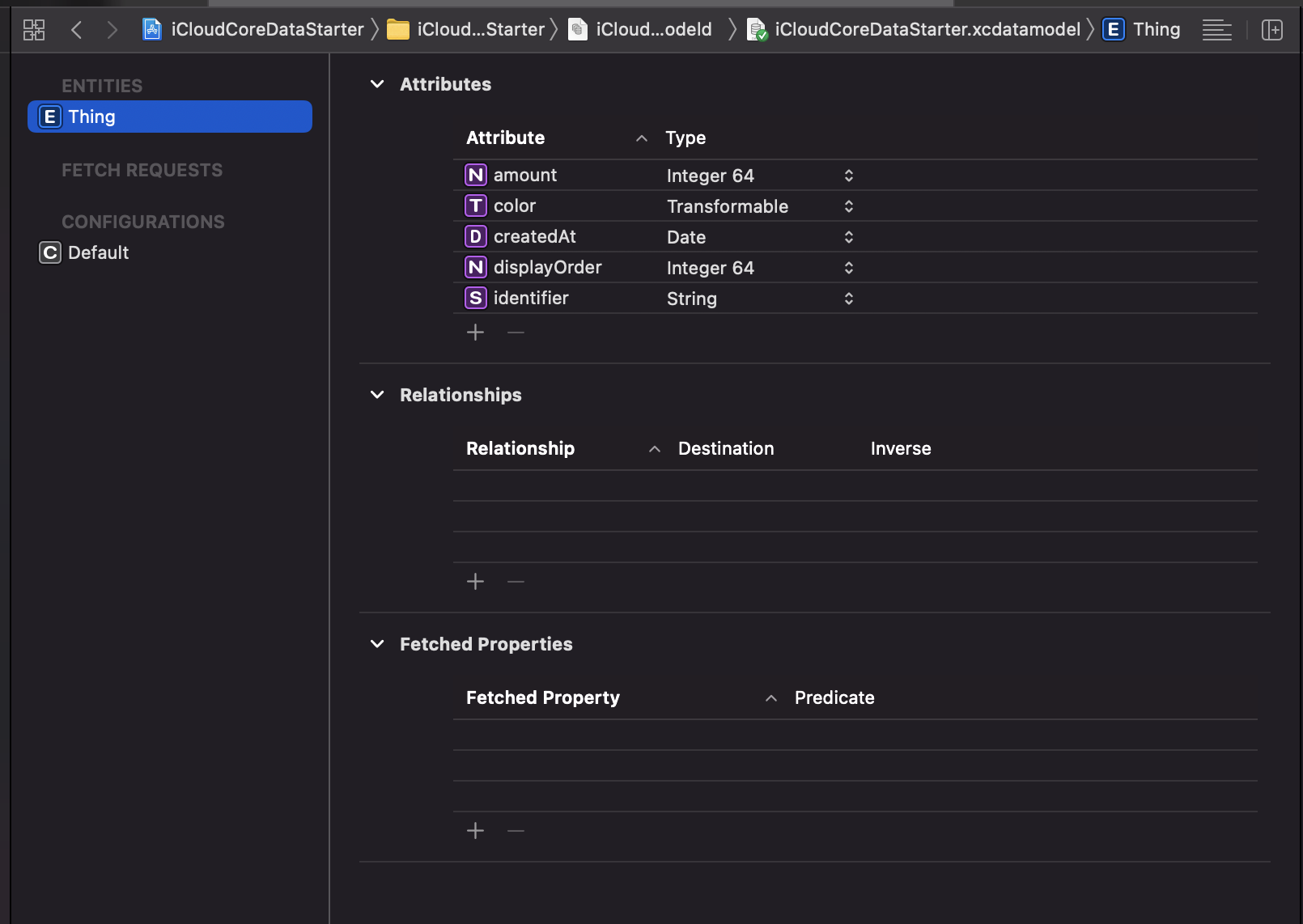 An app group (group.com.example.iCloudCoreDataStarter) is created
and added to each app/extension target in the Signing & Capabilities
tab in Xcode.

App Group identifiers are scoped to your developer account, so you can
use the one in this example project if you like.

To enable iCloud sync for Core Data, you must create an iCloud
container (iCloud.com.example.iCloudCoreDataStarter.iCloud in this
example project) and enable the CloudKit service in the Signing & Capabilities tab in Xcode.

iCloud container identifiers are scoped to your developer account, so
you can use the one in this example project if you like.

Adding CloudKit will typically also enable the Push Notification
capability for you. There is no other configuration you need to do
for push notifications to work with CloudKit – it just works.

However you will also need to add the Background Modes capability
in the Signing & Capabilities tab and select Remote notifications.

IMPORTANT!! Always remember to publish your iCloud container schema
to Production before you publish your app to TestFlight or the App
Store!! 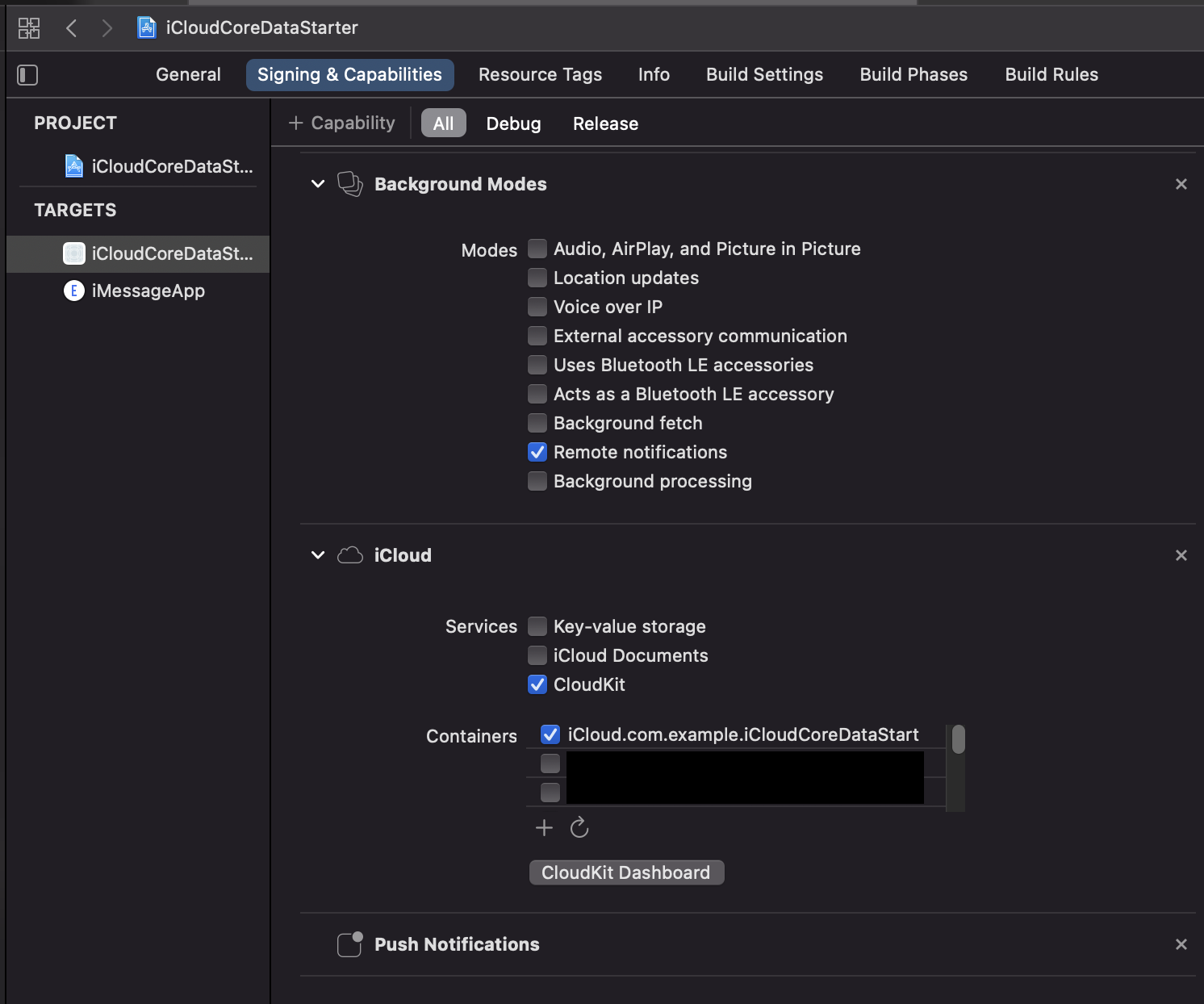 By default CloudKit will log a giant amount of information to the
console and stderr. This can sometimes be useful to debug certain
issues, but there is so much text that it will get in the way of other
logging you may be doing in your app. You can suppress this output
with the following Run Arguments in your Scheme:

The bulk of the Core Data logic lives in the CoreDataStack folder of
the project. These files were designed and written such that there is
nothing specific about them to this example project, i.e. they could
be copied into another project and re-used as-is.

Let’s take a look at what each file does:

Before using the CoreDataStack.shared object, you must provide a
configuration object which will add proper configuration to the Core
Data stack. As early as you can in your app/extension lifecycle, you
must call:

The authorName property on CoreDataStack is also very
important. It is a way to tell which app/extension generated
transactions into the Core Data store. You must set this as early as
possible in the app/extension lifecycle. For example, in the main app:

and in, for example, a Messages app extension:

The author name of the data store transactions help each process
filter out which persistent history transactions need to be replayed
into the current managed object context.

In this example project, you will see that both the configuration and
author name are set in
AppDelegate.application(_:didFinishLaunchingWithOptions:) in the
main app, and in the fetchedResultController initializer in
iMsgThingTableViewController of the Messages app extension.

Let’s talk about the CoreDataStack.coerceObjectIds(managedObjects:)
function. In an ideal world, this method shouldn’t be needed at all,
however I believe there is a nasty bug deep in the guts of the Core
Data framework which makes this function necessary.

When an NSManagedObject is created and added to its
NSManagedObjectContext, but (crucially) before .save() is called
on the manged object context, the new managed object will have a
temporary objectID (which can be checked with
managedObject.objectID.isTemporaryID).

There seems to be a bug (in iOS 14 and iOS 15 as of my latest testing)
where sometimes Step 1 will not actually happen and newly inserted
and saved objects will still have a temporary ID!! This has led to all
sorts of unexpected and frustrating behavior until I figured out what
was actually going on. There are several developer forum posts and
Stack Overflow questions regarding the same behavior, so I am not the
only one that has experienced this bug.

Thus, this evil but necessary coerceObjectIds(managedObjects:) has
come into existence and is called whenever a new NSManagedObject is
created and the managed object context is saved.

When you register a transformer in this way, make sure to set the
Transformer value in the property inspector to the
valueTransformerName you specify in the code: 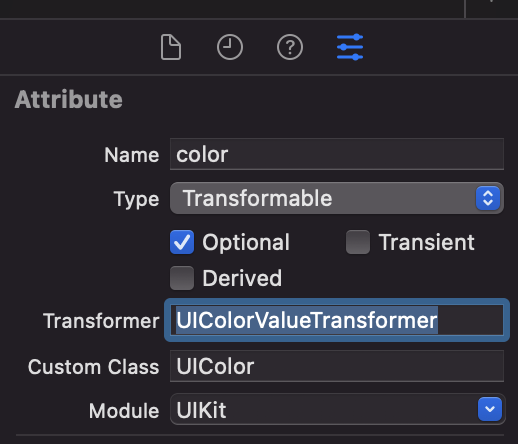 This class implements the CFNotification machinery needed to
communicate between your app and extensions to notify each other of
Core Data updates.

It will take care of updating the diffable datasource snapshot from
the NSFetchedResultsController and deal with reloading cells for
objects which have been updated but not inserted or moved (which
otherwise do not automatically get reloaded).

The other project-specific files are covered here.

I find it very useful to have a file with Core Data object specific helper/utility methods.

Let’s talk about ThingPrimitive — I also find it very useful to have a plain struct which represents the important fields of a Core Data model. There are some advantages to having them around:

This is an example implementation of how to wire up the following
various features in a UICollectionViewController:

If you wanted to use this in your own app with your own Core Data
model, I think you should be able to find/replace thing and
Thing as appropriate and have a pretty good starting point!

A very simple view controller for viewing and updating existing Thing
objects. Demonstrates the use of ThingPrimitive to do an upsert when
tapping the Save button.

This is a UITableViewController inside the Messages App Extension
which displays the Thing objects in the database in a tableView
(instead of a collectionView). This is to demonstrate how similar it
can be to use the same basic patterns and the
CoreDataDiffableFetchedResultsHandler to achieve the same behavior
as in the ThingRootCollectionViewController example.

You can swipe to delete objects, and tapping on a row will randomly
update the Thing object with new amount and color values (these
will be immediately reflected in the main app).

Likewise, if you create/update/delete/move a Thing object in the main
app, it will immediately be reflected in the Messages App
Extension. This can be viewed happening in real-time by launching the
main app and the Messages App Extension in split-view on an iPad
simulator. 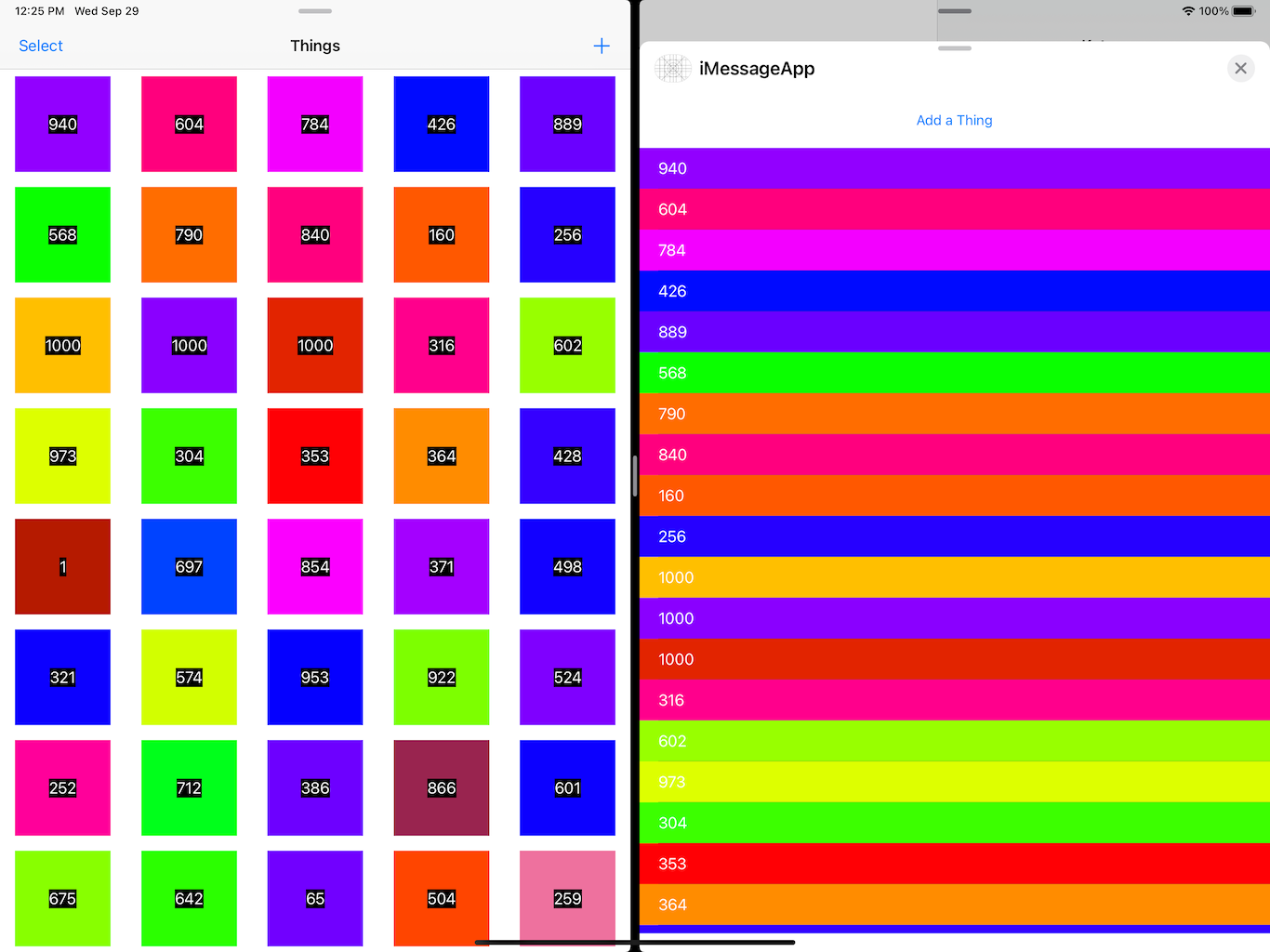 There might be bugs, or unclear documentation, or better ways to do
something! Please open an issue (or send a PR) to help improve this
example project. I will also be updating it as I learn more.

The following were very useful in helping me figure out all of the
knowledge included in this project. There are countless other websites
and stack overflow answers lost to the sand of frantic googling, but
if I happen to find them again I will add them here:

Let me know what you think – @jazzychad on twitter.

And don’t forget to check out Sticker Doodle!