This app has no annoying time restrictions, no ads and no in-app-purchases. Create unlimited GPX traces :).

If you are goint to track without Internet… don’t worry! Just browse the area where you’ll be tracking and it will be cached.

Requires iOS 8.0 or above. Open GPX tracker is an open source app. 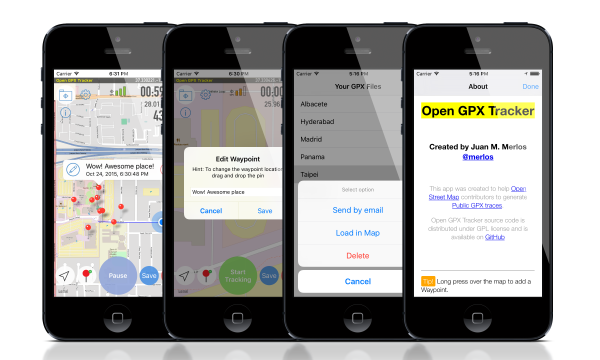 You can use Open GPX tracker for:

The app is available on the App Store since May 2015.

Another option to install the app is to download the source code and compile it by yourself using Xcode. If you want to run it on a device, you also need an Apple developer account.

This application is written in Swift. To download the code run this command in a console:

Then, to test it open the file OpenGpxTracker.xcworkspace with XCode.

Adding a tile server is easy, just edit the file GPXTileServer.swift, uncomment the lines with AnotherMap and modify the templateUrl to point to the new tile server.

You can contribute by forking and submitting a pull request.

Please note that by submitting any pull request you are providing me (Juan M. Merlos) the rights to include and distribute those changes also on the binary app published on the App Store (which is released under Apple’s Standard License Agreement)

This program is free software: you can redistribute it and/or modify it under the terms of the GNU General Public License as published by the Free Software Foundation, either version 3 of the License, or (at your option) any later version.

This program is distributed in the hope that it will be useful, but WITHOUT ANY WARRANTY; without even the implied warranty of MERCHANTABILITY or FITNESS FOR A PARTICULAR PURPOSE. See the GNU General Public License for more details.

You should have received a copy of the GNU General Public License along with this program. If not, see http://www.gnu.org/licenses/.