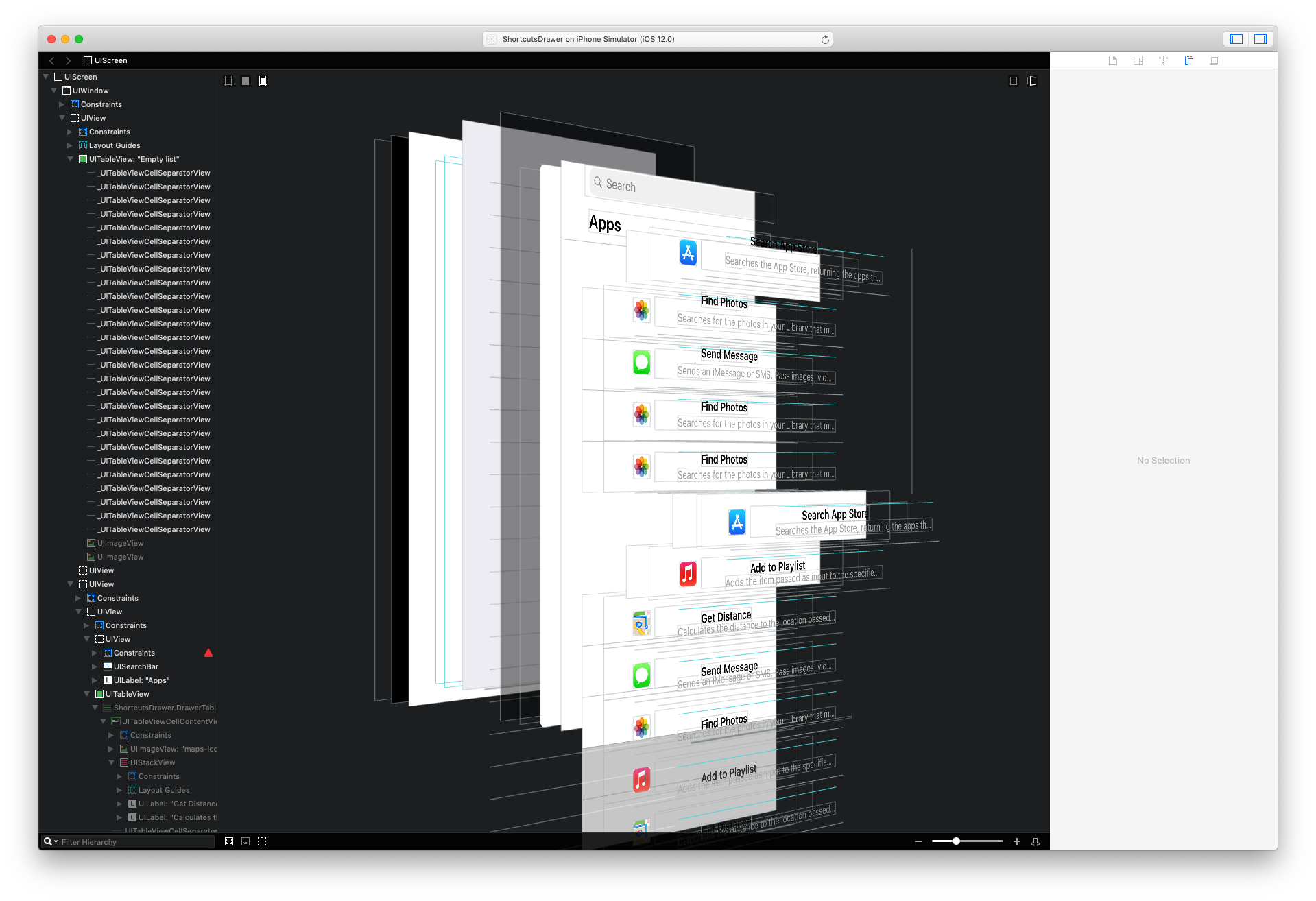 As you begin creating using Siri Shortcuts one of the first thing’s you’ll notice is the ‘Drawer View’ component that sits at the bottom of the screen. It can be pulled out, tapped on, extended, scrolled and closed in many different ways. It presents a list of steps and integrations that can be added to a Shortcut. In true Apple fashion, the ‘Drawer View’ is a unique component in that it is there when you need it, but it can be pushed out of the way when it’s not needed, freeing up the screen space to do other things. It’s not a Modal, or a Push, so as a user you’re never taken too far away from the task at hand.

It looks like a simple enough component at first, but as you begin to look closer you’ll start to realize it’s actually doing a lot in order to create a seamless, unobtrusive editing experience.

I decided to spend some time trying to re-create the Siri Shortcuts Drawer View myself so that I could try to understand the complexity behind it, the interaction problems it solves and to learn more about UIKit.

What becomes most obvious when playing around with Shortcuts is that the drawer view has three core states that it is always switching between.

It’s tucked down at the bottom of the screen, at its most compact size. It displays a Search Bar which is tappable and the view itself can be pulled up.

It’s slightly taller, and displays a Search Bar, a title label and a small list of options or cells that can be tapped, and the view itself can be pulled up but the list cannot be scrolled.

It’s at its largest size, almost the entire height of the containing view, although there’s still a slight gap above. It displays a Search Bar, title label and a long list of options or cells that can be tapped and the list (Scroll View) can be scrolled revealing more option cells. The view itself can be pulled down to return back to its previous smaller states.

What are the functional requirements of the component that my recreation must achieve in order to satisfy the solution?

In the case of the Drawer view providing a delegate to the child’s UIPanGestureRecognizer enables the child to determine if a touch event is handled by the drawer itself as a pan, or the UITableView as a content scroll. To determine that the Velocity, ExpansionState and y ContentOffset of the table view are used to determine the direction of the pan (Up or Down) and the y contentOffset to determine the position within the UIScrollView. If the Drawer is in its Compressed or Expanded states the user should not be able to scroll the UITableView’s content — so we return false. If the Drawer is in its Full Height position we want to —