Circles is a new kind of secure social sharing app.

Which is it really? It's both, at the same time.

Every post in Circles is encrypted from your device all the way to your
friends' devices.
The only people who can see the messages and photos that you share are
the people who you have specifically invited to join your social circles
and groups.

Circles is built on Matrix.
It uses the same E2E security protocols, Olm and Megolm, that Matrix uses
for its encrypted group chat.
Circles does not attempt to "roll its own" encryption code.
Instead, it uses the Matrix iOS SDK
for all security and encryption related functions.

Circles for iOS should run on any device with iOS 14+.
Building a version of Circles for Android devices is one of our top priorities
for the future.

In the Circles app, we support two different kinds of social structures:
circles and groups. 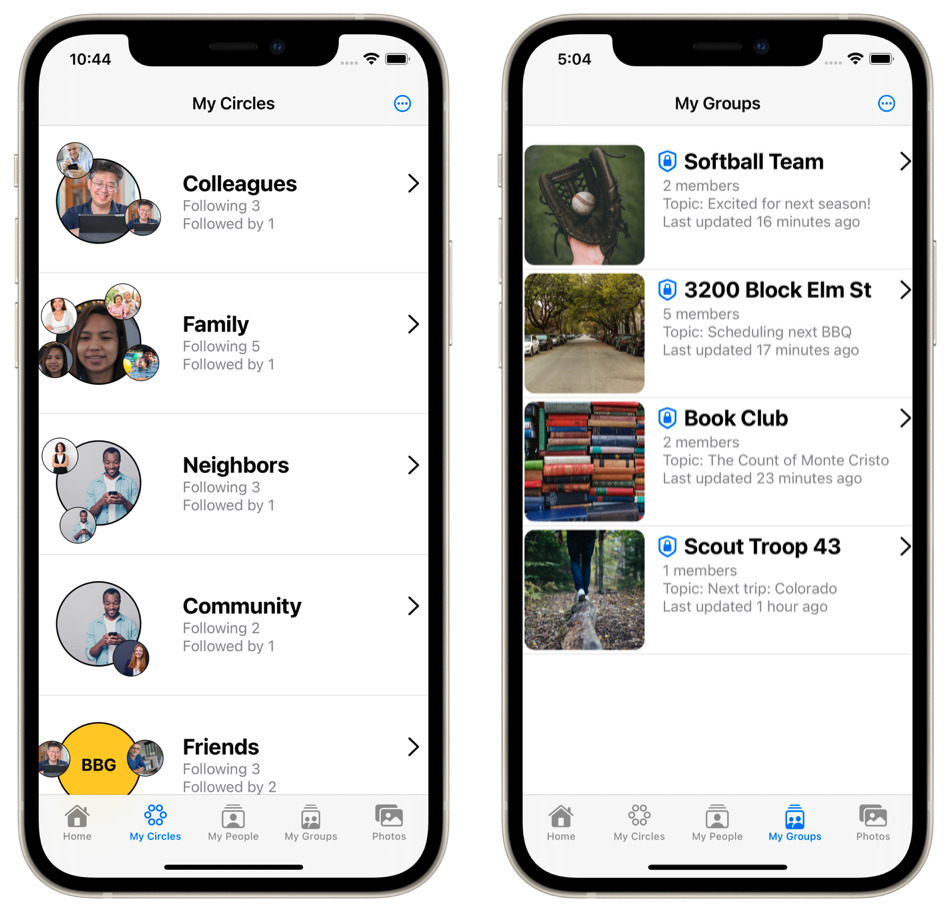 Groups are simpler, so let's talk about them first.

A group in the Circles app works pretty much like a group anywhere else.
It has a well-defined set of members, and everyone who's in the group is
in the same group with everyone else.
Everyone in the group can see everything posted in the group. 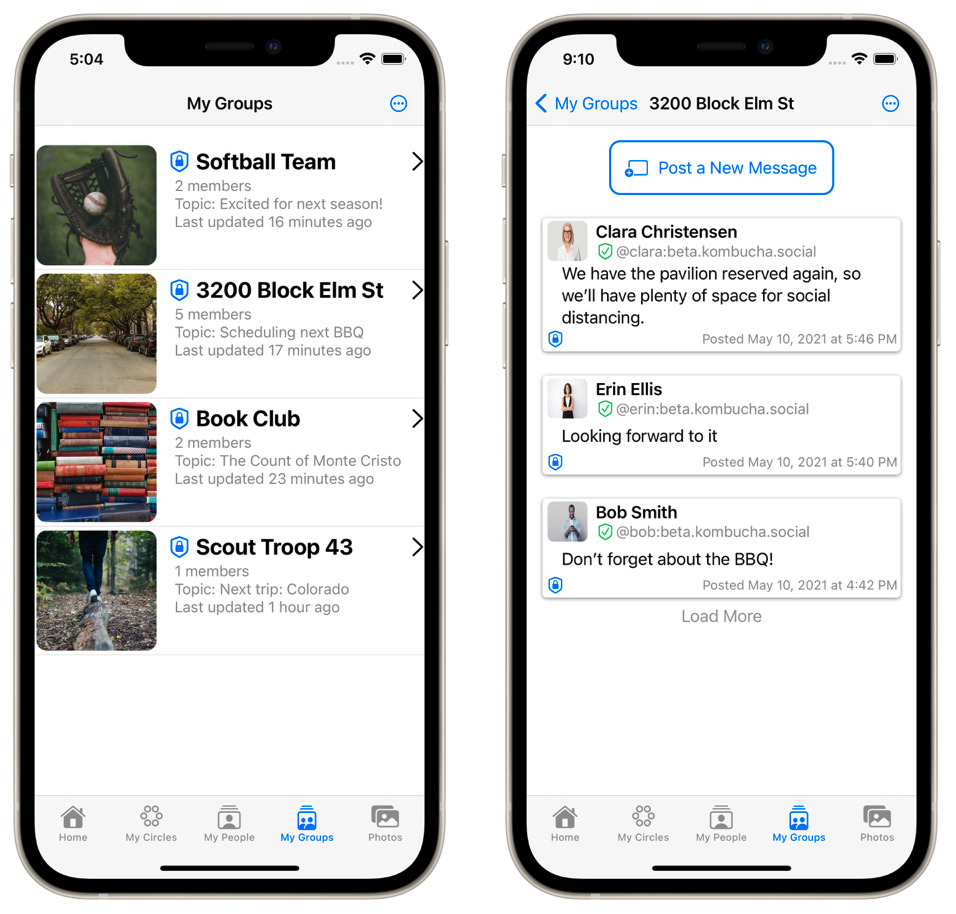 Any organized group of people in the real world is probably a reasonable
fit for a group in the app.
For example:

Any organized group of people with well-defined membership is probably a
reasonable fit for a group in the app.

In the real world, if you and I are friends, then your set of friends is
probably not exactly the same as my set of friends.
And that's OK.

Similarly, if you and I are family, that doesn't mean that the set of people
who you consider to be family must be exactly the same people that I call
family.
For one thing, if you and I are blood relatives, then your in-laws are
probably totally unrelated to my in-laws, and vice versa.

And, again, that's totally OK.
That's how human relationships work.
Circles are our way of helping the technology catch up to the social reality.

A circle is a good fit for any type of relationship where every individual
has their own network of connections that's distinct from anyone else's. 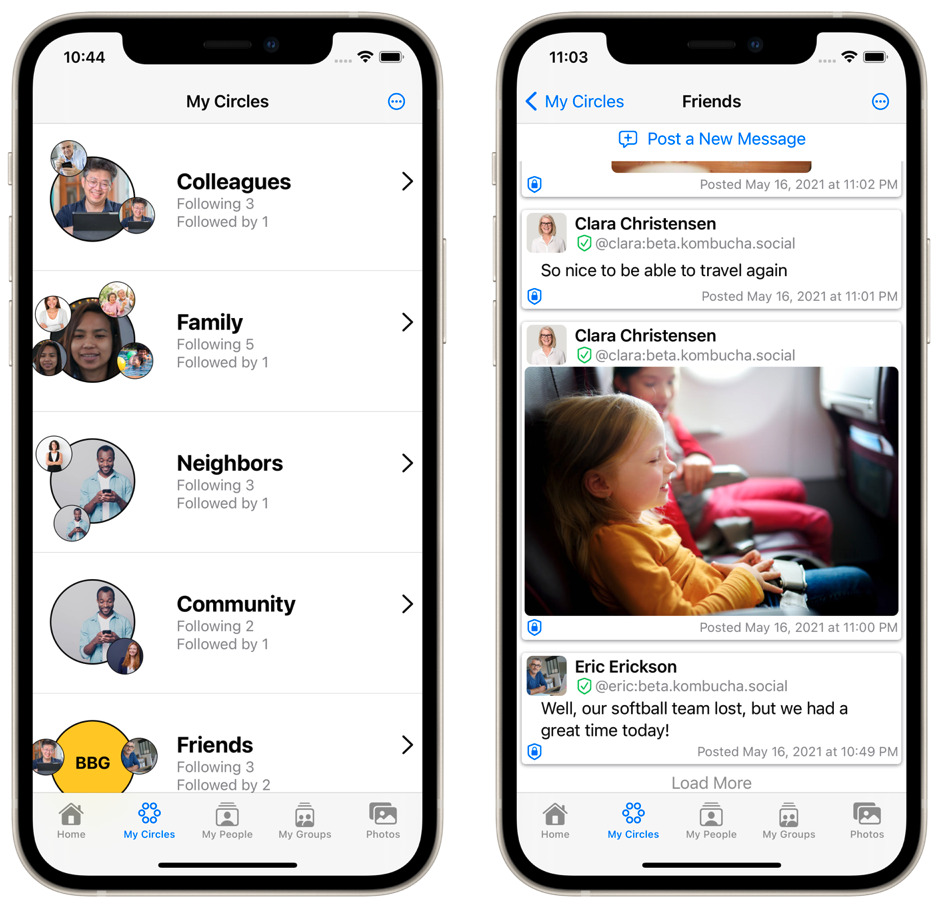 Maybe the best way to think about a circle is that it's like your own
little private, secure version of Facebook in a microcosm.
The only people in it are the people who you really care about, and
they're only sharing things that you have some mutual interest in.
Each circle functions like your own personal "wall" or "page" where
you can share things.
It also gives you your own private timeline of updates from your
friends in that circle.

We also give you encrypted photo galleries.
You can share a gallery with your friends and family, or you can just
use it for yourself as an encrypted cloud backup of your photos.

Galleries also give you an easier way to manage photos that you want
to share with more than one of your groups or circles.
If you upload the photo into a gallery first, you can then share it
with a group or a circle with just a couple of taps on the screen.