The InjectionIII app
available as a Swift Package. i.e.: 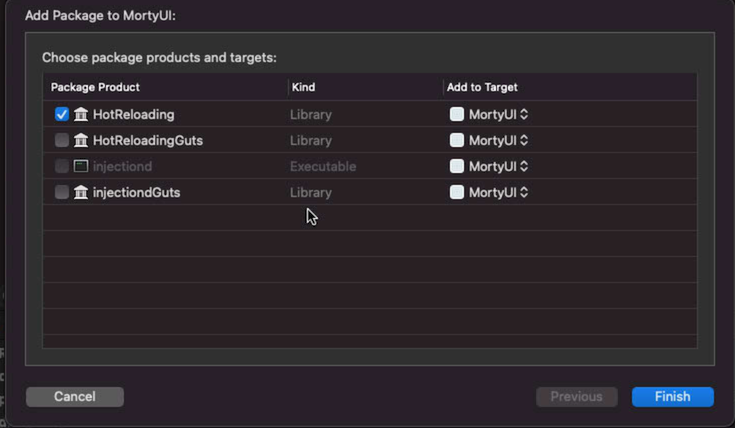 Then you can do this (using the simulator)…

To try out an example project that is already set-up, clone this fork of
SwiftUI-Kit.

To use on your project, add this repo as a Swift Package to your project and add
the following "Run Script" "Build Phase” to run the HotReloading daemon:

You should see a message that the app has connected and which
directories it is watching for source file changes. The daemon also
has an icon on the menu bar you can use to access features such as tracing
and remote control. This script also patches your project slightly to add the
required "-Xlinker -interposable" “Other Linker Flags” so you will
have to run the project a second time after adding the HotReloading
package and and the script build phase for hot reloading to start working.

Consult the REAME of the InjectionIII
project for more information in paticular how to use it to inject SwiftUI using the
HotSwiftUI protocol extension. It’s
the same code but you no longer need to download or run the app and the project
is selected automatically.

If you want to work on the hot reloading code, clone this repo and drag
its directory into your project in Xcode and it will take the place of the
configured HotReloading Swift Package when you build your app.

The App Tracing functionality uses the OliverLetterer/imp_implementationForwardingToSelector trampoline implementation
via the SwiftTrace project under an MIT license.

SwiftTrace uses the very handy https://github.com/facebook/fishhook
as an alternative to dyld_dynamic_interpose. See the project source and header
file included in the app bundle for licensing details.

This release includes a very slightly modified version of the excellent
canviz library to render “dot” files
in an HTML canvas which is subject to an MIT license. The changes are to pass
through the ID of the node to the node label tag (line 212), to reverse
the rendering of nodes and the lines linking them (line 406) and to
store edge paths so they can be coloured (line 66 and 303) in “canviz-0.1/canviz.js”.

It also includes CodeMirror JavaScript editor for
the code to be evaluated in the Xprobe browser under an MIT license.